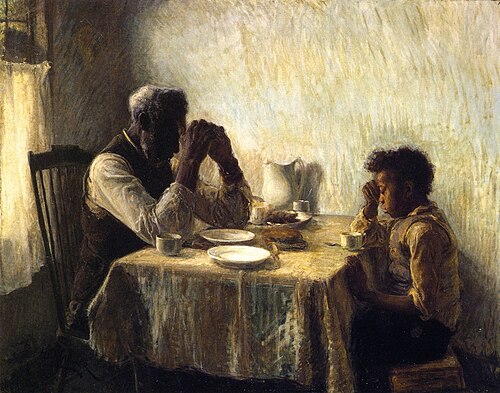 The Wikipedia article of the day for June 21, 2021 is The Thankful Poor.

The Thankful Poor is an 1894 painting by the African-American painter Henry Ossawa Tanner. It is a genre painting of two African Americans praying at a table and shares themes with Tanner’s other works like The Banjo Lesson (1893). The painting is considered a milestone in African-American art, notably for its countering of racial stereotypes by portraying African-American culture in a dignified manner. This depiction was influenced by Tanner’s father and the African Methodist Episcopal Church. Despite its popularity with critics, The Thankful Poor was Tanner’s last African-American genre work before he began to focus on biblical scenes. After remaining hidden for years, the painting was discovered in a storage closet of the Pennsylvania School for the Deaf in 1970, before being purchased by Camille and Bill Cosby in 1981 for their private collection. In 2020, the painting was sold by the Cosbys to Art Bridges, a foundation created by Alice Walton for loaning artwork.