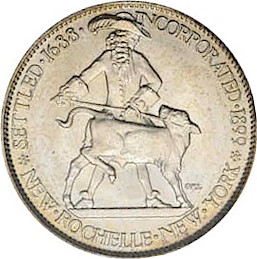 The Wikipedia article of the day for June 24, 2021 is New Rochelle 250th Anniversary half dollar.

The New Rochelle 250th Anniversary half dollar is a fifty-cent piece struck by the United States Bureau of the Mint in 1937 as a commemorative coin to mark the 250th anniversary of the settling of New Rochelle in Westchester County, New York. The coin’s obverse (pictured) depicts a fatted calf being led by John Pell, who sold the land on which New Rochelle now stands; a “fatt calfe” was to be presented to him annually on June 24 if he asked for it, lest New Rochelle’s land be forfeited back to him. The other side shows a fleur-de-lis, an element of the city seal of New Rochelle and of France’s La Rochelle, its eponym. The piece is dated 1938 but was minted the previous year. Artist Gertrude K. Lathrop designed the coin; she was hired based on her work on the 1936 Albany Charter half dollar. New Rochelle’s coin committee sold the half dollar for $2.00 both locally and by mail order, sending them to all 48 states and internationally, distributing them during 1937 and early 1938. Lathrop’s work has been both praised and criticized by numismatic commentators.