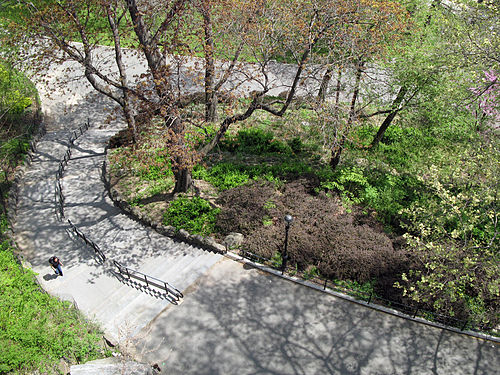 The Wikipedia article of the day for July 16, 2021 is Morningside Park (Manhattan).

Morningside Park is a 30-acre (12-hectare) public park in Upper Manhattan, New York City. The area, originally known as “Muscota” by the Lenape Native Americans, features a cliff that separates Morningside Heights (to the west) from Harlem. The city commissioned Central Park’s designers Frederick Law Olmsted and Calvert Vaux to produce a design for the park, which they did in 1873. Jacob Wrey Mould was hired to design new plans in 1880, but little progress occurred until Olmsted and Vaux were asked to modify their plans following Mould’s death in 1886. After the park was completed in 1895, three sculptures were installed: Lafayette and Washington, Carl Schurz Memorial, and Alfred Lincoln Seligman Fountain. Columbia University proposed constructing a gym in the park’s southern end in the early 1960s, but abandoned the plan after students protested in 1968. The site of the unbuilt gym was turned into a waterfall and pond around 1990, and an arboretum was added in 1998.