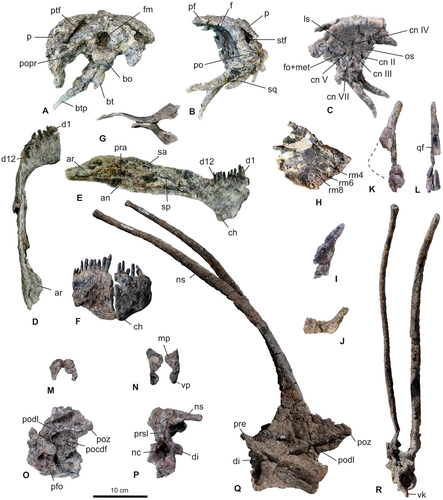 The Wikipedia article of the day for August 31, 2021 is Bajadasaurus.

Bajadasaurus is a genus of sauropod dinosaur of northern Patagonia, Argentina, from around 145 to 133 million years ago during the Early Cretaceous epoch. It was first described in 2019 based on a single specimen (elements pictured) found in 2010 that includes a largely complete skull and parts of the neck. The only species is Bajadasaurus pronuspinax. The genus is a member of Dicraeosauridae, a group of relatively small and short-necked sauropods. Bajadasaurus sported bifurcated (two-pronged), extremely elongated neural spines extending from the neck; the 2019 description of Bajadasaurus suggested that they could have served as passive defense against predators. The skull was slender and equipped with around 48 teeth that were pencil-shaped and restricted to the front of the jaws. Its eye openings were exposed in top view, possibly allowing the animal to look forwards while feeding. It shared its environment with other dinosaurs including the sauropod Leinkupal and different theropods.